Disney Cruise Line sent out emails this morning announcing the the [Disney_Wonder]’s dry dock by canceling two Miami sailings in late January 2014. While the email states this is due to unplanned maintenance which could be attributed to a small fire on the second to last Alaskan cruise, the reality is that the Disney Wonder will be due for an out of water inspection by September 2014. The Disney Wonder will reposition from Galveston, sail her first two sailings from Miami, and then will be taken out of service for a period of 10 days. As a result, the following sailings aboard the Disney Wonder have been cancelled and are no longer available:

In addition to a full refund of the voyage fare, they will also receive a 25% discount on a future Caribbean or Bahamian sailing up to 7-nights in length taken within one year of their original voyage and excluding holiday sail dates.

According to the email from Disney Cruise Line refunds will automatically be returned to the original form of payment. DCL sincerely hopes that another sailing meets guests’ and invites you to contact them at 1-866-325-3905 by September 27, 2013, to explore alternate sail dates and utilize the future cruise discount. Guests on these sailings with independent flight arrangements may submit any flight change fees via e-mail to DCL.Guest.Communications@disneycruise.com for consideration. 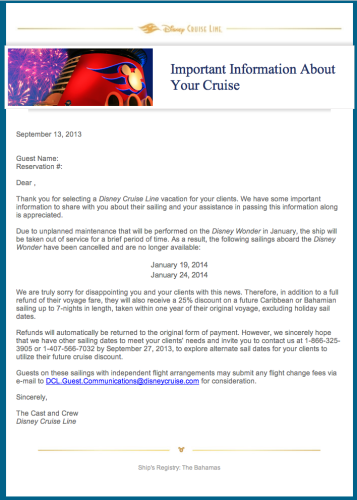