Today, we are going to take a closer look at the AquaDunk water slide that will be added during the Disney Magic’s dry dock this fall.  The AquaDunk body slide will build anticipation with a three-second countdown before a trap door releases guests on a near vertical drop from the top of the forward funnel on a loop-de-loop through a clear acrylic tube extending around 20 feet over the port side of the ship, 112 feet above the water, before ending with a big splash on Deck 10.  The height requirement for the AquaDunk is 48-inches.

FormaShape 3D Architectural Design Solutions, the same company that designed, engineered, and manufactured the larger than life Mickey Mouse hand, the Mickey slide, and the AquaDuck aboard [Disney_Dream] and [Disney_Fantasy], also appear to be behind the AquaDunk (and more than likely, the Twist N’ Spout).

FormaShape’s sister,  WhiteWater West, is the largest manufacture of fiberglass watermark attractions.  WhiteWater West’s catalog includes three similar waterslides AquaDrop, AquaLoop, and Flatline Loop.  All three of these waterslides list a per hour capacity of 180 people with speeds ranging from  between 18 and 40 miles per hour (26 to 59 feet per second).  Additionally, each appear to be equipped with an AquaLaunch capsule.  According to the catalog, an AquaLaunch capsule will cause an “incredible adrenaline-rush” in the rider as anticipation grows up to the release of the trap door. 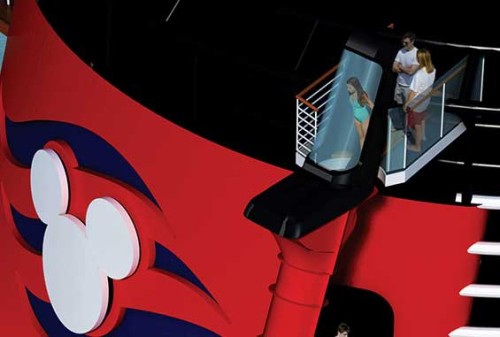 It would appear that the AquaDunk is not the first of its kind.  In January 2012, Carnival Cruise Lines’ Carnival Spirit underwent a refurbishment and emerged with the steepest water slide at sea, Green Thunder.

Here is a shorter POV video of Carnival Spirit’s Green Thunder.  Including the three second countdown the total ride time is about 8 seconds. 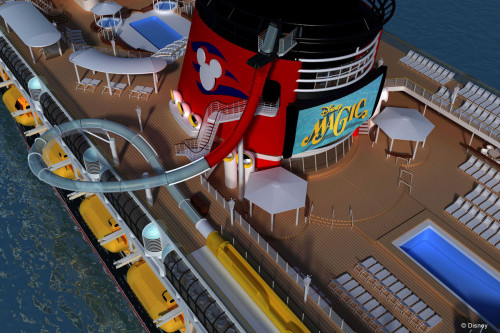 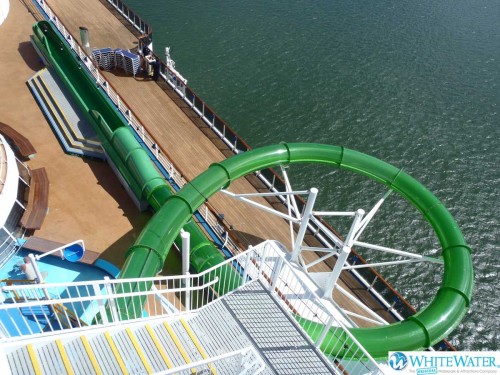 Judging from the video and photos, the Green Thunder and AquaDunk appear to be very similar waterslides aside from the obvious cosmetic differences.  Based on the renderings, Disney Cruise Line has done an amazing job at seamlessly integrating the AquaDunk into the Disney Magic all while maintaining her classic ocean liner appearance.