On Friday, Anthony Connelly was named Senior Vice President of Operations for Disney Cruise Line filling the shoes of Tom Wolber, who became the senior vice president for Disney Sports Enterprises and Downtown Disney earlier this year.  On May 12, 2013, Connelly will assume the responsibility for the fleet-wide shipboard operations which include, onboard entertainment, youth activities, marine and technical operations, purchasing, logistics and shoreside travel operations as well as, operations at Disney’s private island Castaway Cay. 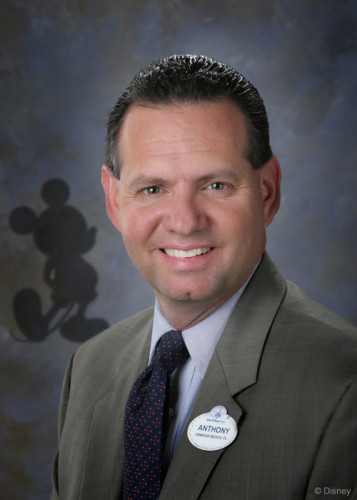 Connelly will report to Disney Cruise Line President, Karl Holz who is “thrilled” to have him join the Disney Cruise Line team.  According to Holz, “Anthony’s strategic thinking and leadership skills, business and financial acumen, and his passion for Disney will position him for success in this role.”

Connelly began his Disney career almost 25 years ago in 1989, and advanced through various key leadership positions throughout the Walt Disney Parks and Resorts Finance organization.  He has served as Senior Vice President and Chief Financial Officer for Disney’s U.S. Parks and Resorts businesses since 2006.

Connelly is actively involved in the state and local community, serving on the Board of Directors for the Florida Chamber of Commerce, Enterprise Florida, University of Central Florida Foundation, and Boys & Girls Clubs of Central Florida. Anthony was also a member of Florida Governor Rick Scott’s Economic Development Transition Team as well as a member of Florida Chief Financial Officer Jeff Atwater’s Transition Team. He has a master’s of business administration from The Wharton School of the University of Pennsylvania and is also a Certified Public Accountant.