The tropical depression that formed earlier this week could cause Captain Tom and his crew to reroute the [Disney_Fantasy]’s scheduled 7-Night Western Caribbean cruise which sets sail from Port Canaveral this Saturday.  Tropical Depression 5  is currently moving West towards the Windward Islands at 21 miles per hour with maximum sustained winds of 35 miles per hour.

The current National Hurricane Center (NHC) forecast has TD5 continuing to move westward or west-northwestward at the same speed for the next 48-hours. 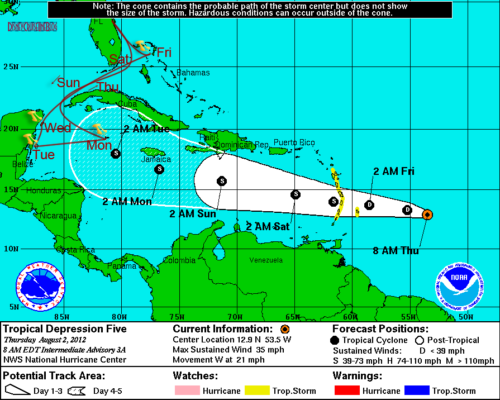 Mariners are  taught the 1-2-3 Rule, which provides a guideline for tracking and predicting severe storms.  This map shows the 1-2-3 Danger Area defined by the rounded long-term NHC forecast errors of 100-200-300 nautical miles at 24-48-72 hours, respectively. The contour defining the shaded area is constructed by accounting for those errors and then broadened further to reflect the maximum tropical storm force (34 knot) wind radii forecast at each of those times by the NHC.

The good news right now is that based on satellite images, the depression is poorly organized.  This simply means it currently has a lesser probability of intensifying into a tropical storm (or worse) unless it becomes more organized.  No significant change in intensity is expected today, but some strengthening is possible thereafter.  An Air Force Reserve Hurricane Hunter plane is scheduled to investigate the depression later today. 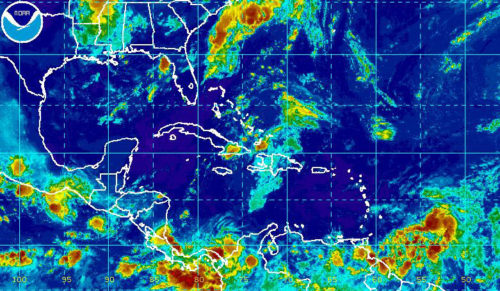 Disney Cruise Line will do what it needs to do in order to keep the ship, crew, and passengers safe.  It may mean that the western itinerary becomes an eastern, the western itinerary could be modified to stay ahead or behind the tropical weather system.  Regardless, anyone sailing should feel safe and enjoy the week wherever the ship may go. After all, you are on the Disney Fantasy!!!