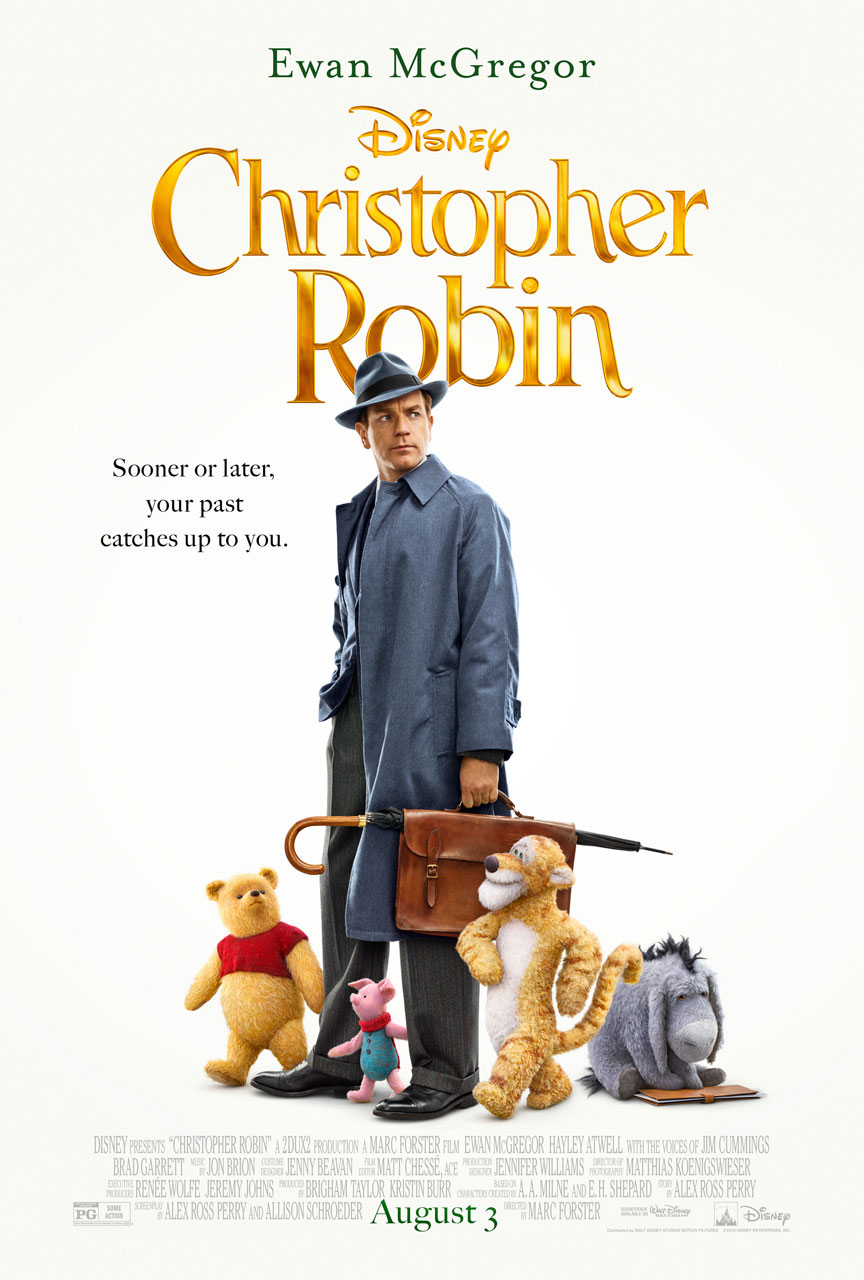 Runteime: 1 hr 44 mins Rated: PG-13
Theatrical: Aug 3, 2018
Home: Nov 6, 2018
In the heartwarming live action adventure Disney’s “Christopher Robin,” the young boy who embarked on countless adventures in the Hundred Acre Wood with his band of spirited and lovable stuffed animals, has grown up and lost his way. Now it is up to his childhood friends to venture into our world and help Christopher Robin remember the loving and playful boy who is still inside. Now grown up, Christopher Robin is stuck in a job where he is overworked, underpaid and facing an uncertain future. He has a family of his own, but his work has become his life, leaving little time for his wife and daughter. Christopher has all but forgotten his idyllic childhood spent with a simple-minded, honey-loving stuffed bear and his friends. But when he is reunited with Winnie the Pooh, now tattered and soiled from years of hugs and play, their friendship is rekindled, reminding Christopher of the endless days of childlike wonder and make believe that defined his youth, when doing nothing was considered the very best something. Following an unfortunate mishap with Christopher Robin’s briefcase, Pooh and the rest of the gang including Piglet, Eeyore and Tigger, step out of the forest and venture into London to return the crucial possessions...because best friends will always be there for you. Disney’s “Christopher Robin” is directed by Golden Globe® nominee Marc Forster (“Finding Neverland”) from a screenplay by Alex Ross Perry (“Golden Exits”) and Oscar® nominee Allison Schroeder (“Hidden Figures”) and a story by Perry based on characters created by A.A. Milne and E.H. Shepard. The producers are Brigham Taylor and Kristin Burr with Renée Wolfe and Jeremy Johns serving as executive producers. The film stars Golden Globe winner Ewan McGregor (“Fargo”) as Christopher Robin; Golden Globe nominee Hayley Atwell (“Agent Carter”) as his wife Evelyn; Bronte Carmichael as his daughter Madeline; and Emmy® winner Mark Gatiss (“Sherlock”) as Giles Winslow, Robin’s boss. The film also features the voices of: Jim Cummings (“Winnie the Pooh”) as Winnie the Pooh and Tigger; three-time Emmy winner Brad Garrett (“Everybody Loves Raymond”) as Eeyore; Golden Globe nominee Toby Jones (“Harry Potter and the Chamber of Secrets”) as Owl; Nick Mohammed (“The Martian”) as Piglet; Oscar winner Peter Capaldi (“Dr. Who”) as Rabbit; and Oscar nominee Sophie Okonedo (“The Secret Life of Bees”) as Kanga. Disney has a history with the A.A. Milne characters dating back to 1966 when the studio released the animated short “Winnie the Pooh and the Honey Tree” featuring the character Christopher Robin, which was followed by the shorts “Winnie the Pooh and the Blustery Day” and “Winnie the Pooh and Tigger, Too,” as well as several full-length features and numerous direct-to-DVD titles. Disney’s “Christopher Robin” will be released nationwide August 3, 2018.   Printables