According to a preliminary agenda for an upcoming Miami-Dade Board of County Commissioners meeting, Disney Cruise Line is in talks to extend their current preferred berthing agreement with the country which overseas PortMiami. In addition to the extension of the current agreement, Disney Cruise Line and Miami-Dade are looking to negotiate the construction of a new cruise terminal on the south side of the port. The resolution presented below is on the Miami-Dade Board of County Commissioners agenda for Wednesday, September 5, 2018.

RESOLUTION APPROVING AMENDMENT NO. 2 TO THE PREFERENTIAL BERTHING AGREEMENT BETWEEN MIAMI-DADE COUNTY AND MAGICAL CRUISE COMPANY LTD. D/B/A DISNEY CRUISE LINE (DISNEY) TO EXTEND THE TERM OF THE TERMINAL BERTHING AGREEMENT, INCREASE THE MINIMUM ANNUAL GUARANTEES, AMEND THE TERMINAL USAGE RIGHTS AND THE PARKING INCENTIVE, AND ESTABLISH PASSENGER SURPLUS MOVEMENTS AND A MINIMUM ANNUAL DOCKAGE GUARANTEE ALL WITH AN ESTIMATED FISCAL IMPACT OF $26,400,000.00 IN ADDITIONAL PAYMENTS TO THE COUNTY; APPROVING A MEMORANDUM OF UNDERSTANDING BETWEEN MIAMI-DADE COUNTY AND DISNEY FOR PRIMARY NEGOTIATION RIGHTS FOR A TERM OF 18 MONTHS TO NEGOTIATE THE CONSTRUCTION OF A NEW CRUISE FACILITY ON THE SOUTH SIDE OF THE PORT; AND AUTHORIZING THE COUNTY MAYOR OR THE COUNTY MAYOR’S DESIGNEE EXECUTE SAME AND EXERCISE ALL RIGHTS CONTAINED THEREIN; AND APPROVING WAIVER OF RESOLUTION NO. 130-06 (Port of Miami)

According to the pending agreement, in 2023, Disney Cruise Line will replace its seasonal service from PortMiami to a year-round service with rotating 5-night/5-night/4-night sailings onboard a large vessel with a minimum of 3,500 passengers beginning January 2023. By making PortMiami a second year-round homeport, Disney Cruise Line will guarantee Miami-Dade County a minimum of 360,000 passengers movements beginning FY2023 through the term of the berthing agreement, April 30, 2024.

Currently, Disney has a preferred berthing agreement for Terminal F set to expire on September 30, 2018. To accommodate a year-round ship, Disney Cruise Line is considering a parcel on the south side of the port for a new cruise terminal, just to the east of Terminal J and down the road from Royal Caribbean’s corporate offices. 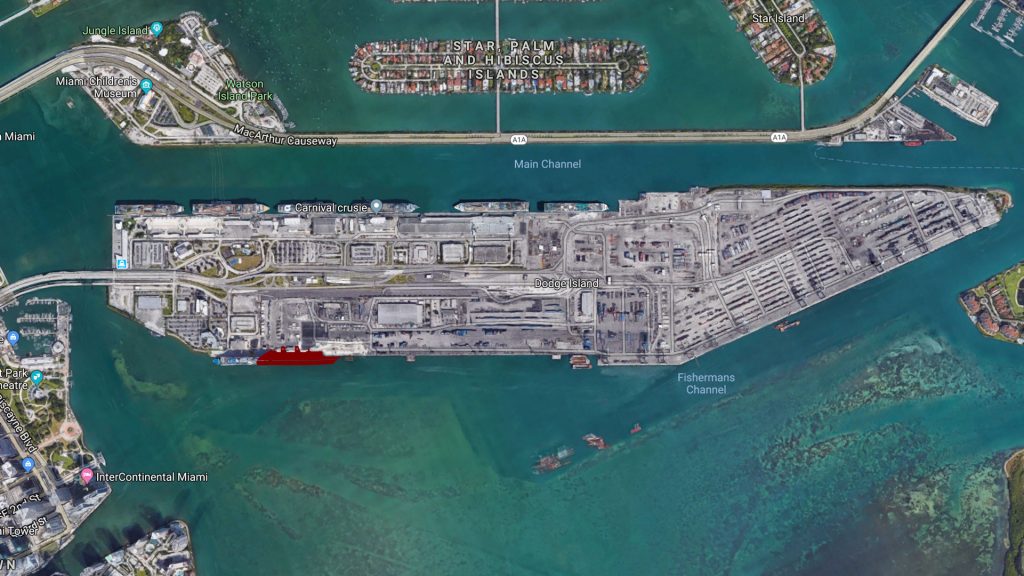 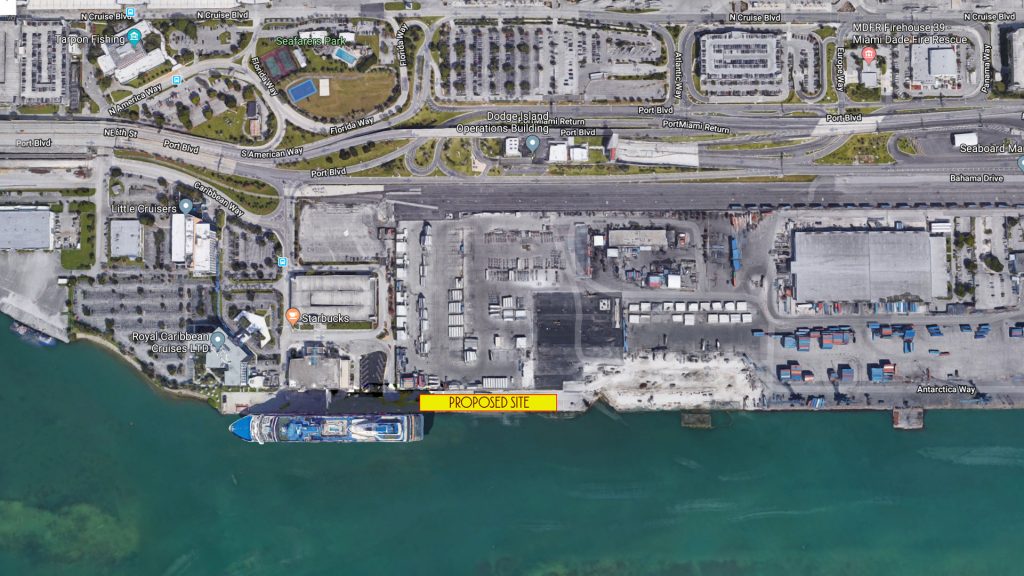 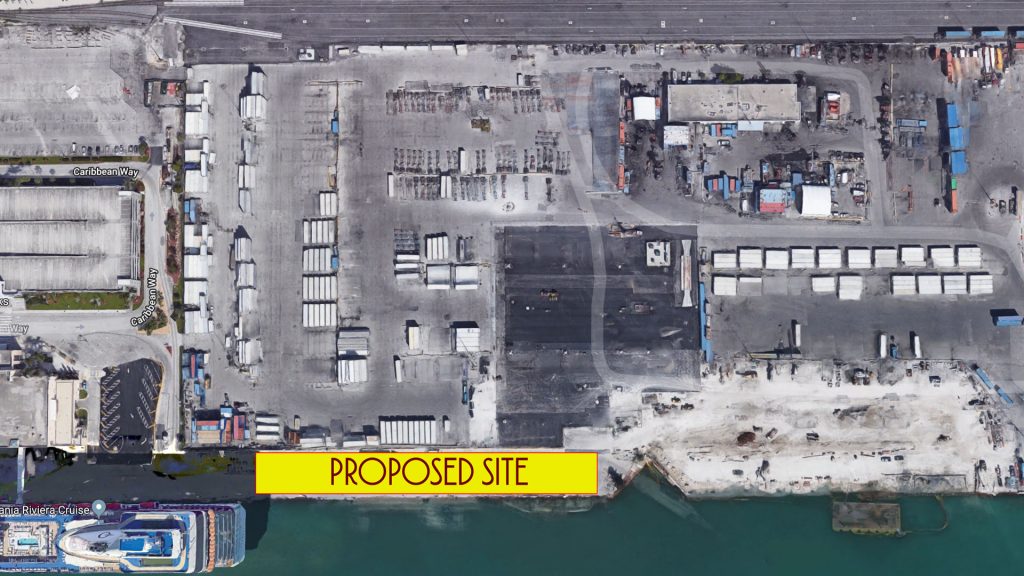 This new cruise terminal would allow Disney to homeport a large vessel capable of carrying 3500+ passengers and vessels up to 1,150 feet. Disney seeks to expand their brand at PortMiami. Following the first large ship in January 2023 followed by a second large vessel sailing seasonally on January 2024 with 3-night/4-night rotation. 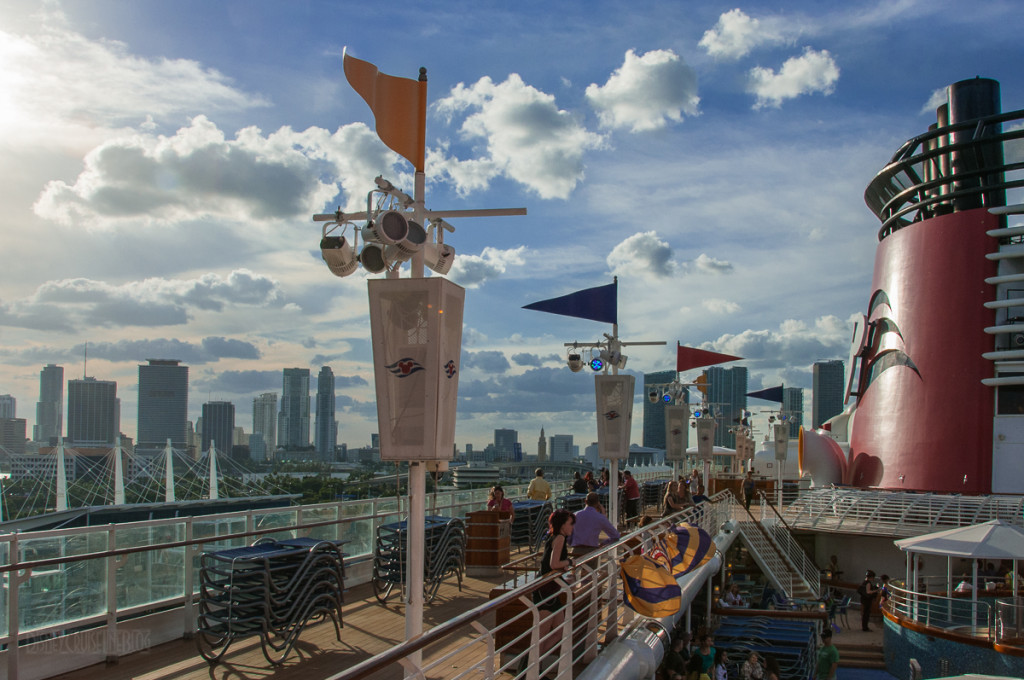 Last but not least, the berthing agreement included Disney Cruise Line’s berthing schedule for FY2018-2019 which includes sail dates in 2020 which will not likely be announced until DCL’s next itinerary announcement which we anticipate in October of this year. 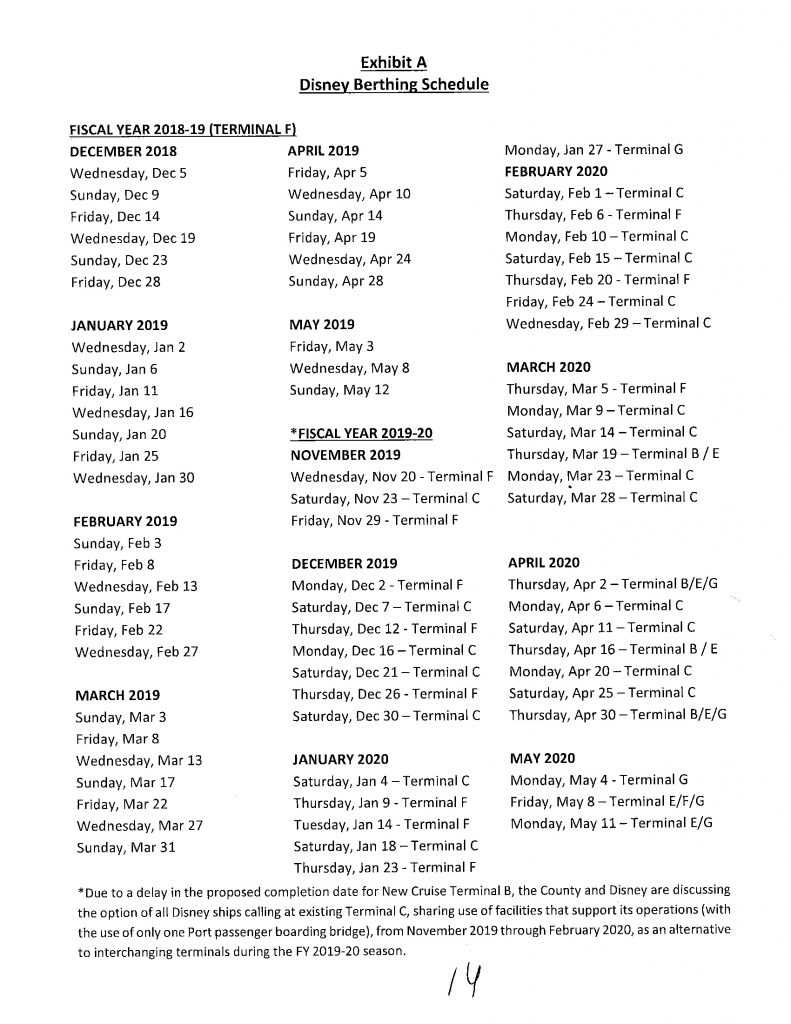 Disney’s plans to expand their presence at PortMiami with year-round and seasonal sailings along with recent revelations from Port Canaveral suggesting two of the new LNG builds will be based out of Port Canaveral further show why Disney is looking for a new island in the Bahamas.