We have some new information to follow up on Monday’s news that the late fall 2014 sailings the Disney Dream are being modified to accommodate the Disney Magic at Port Canaveral.  There were two email notices sent to travel agents today.  The first notice was to inform passengers booked on the October 20, 2014 2-Night Cruise to Castaway Cay that the cruise has been canceled.  If you were booked on this sailing, your reservation will be moved to a hold date of December 3, 2014, which is a 4-Night sailing on the Disney Wonder.  Those affected can contact Disney Cruise Line starting June 12, 2013 to adjust this reservation. 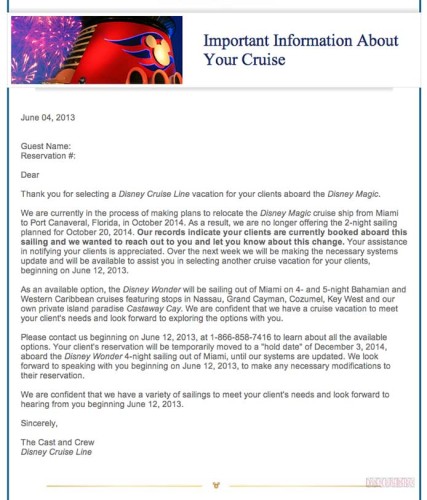 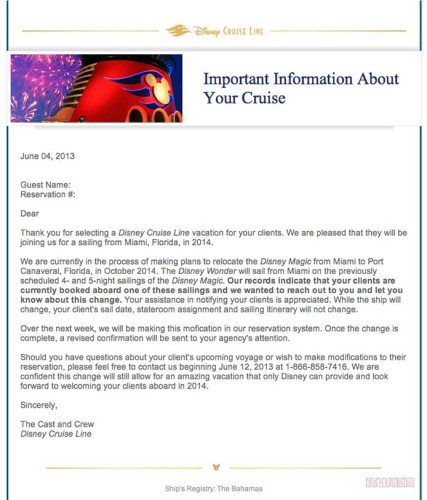 Based on the itinerary brochure we picked up on the [Disney_Fantasy] in March, the Disney Wonder was originally slated to sail on 7-Night Western Caribbean sailings from Port Canaveral beginning in November 2014 while the Disney Magic was sailing from Miami.    It was confirmed (see update below) today, that the Disney Magic will indeed be sailing the 7-Night Western Caribbean itinerary leaving on Sundays from Port Canaveral.

The itinerary pages for each ship have not been updated.  I am going to wait until the dust settles before making any changes.

UPDATE: I heard back from Disney Cruise Line this afternoon, and it has been confirmed that the Disney Magic will be sailing on 7-Night Western Caribbean cruises from Port canaveral.  Below is an excerpt from the response I received from Rebecca Peddie, Manager Public Affairs at Disney Cruise Line.