Speculation concerning the dry dock of the Disney Wonder and Disney Dream has increased over the past week with classic ship home port shake up.  The Disney Wonder will be closing in on her 5-year date in the fall of 2014 leaving no choice but to go offline for a mandatory dry dock.  Back in February, I penciled in an overhaul for the Disney Wonder following her Port Canaveral sailings, resuming service from Port Canaveral on Western Caribbean sailings.

Following the recent itinerary changes and the delay in the Panama Canal expansion project, the only clear option for the Wonder would be a standard two week dry dock prior to the first Miami sailing on October 11, 2014; a date which was confirmed last week in an email from Disney Cruise Line. This scenario would mean the Port Canaveral sailings following the Panama Canal cruise would be canceled.

Below is a revised projection on the Disney Wonder’s September and October 2014 sailing calendar assuming her schedule will remain through her 2014 Eastbound Panama Canal Cruise.  The Disney Wonder dry dock would fit between September 26th through October 10th.  PLEASE REMEMBER THIS IS JUST MY SPECULATION.  Until the recent itinerary changes have been made on Disney Cruise Line’s website, I say anything is possible. 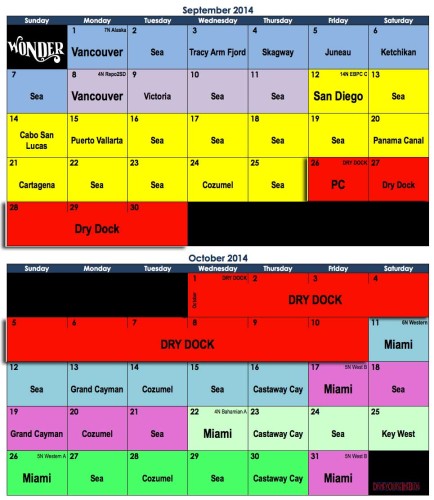 Now, for the elephant in the room – the Disney Dream.  The International Maritime Organization (IMO) regulations have stated that a cruise ship hull be inspected annually (in-water), and undergo an out of water hull inspection two times in a five year period (based on the date on the ship’s International Load Line certificate) not to exceed 3 years.  In fact, I believe we saw an in-water inspection at Castaway Cay last year as a team of divers were set up on the pier along with ROVs.  (I will see if I can dig up some pictures later.)

Under the IMO regulation one would expect the Disney Dream to go out of service before January 2014 for her first dry dock.  However, the Disney Dream and the Disney Fantasy fall under slightly different guidelines.  In May 2010, IMO approved new guidelines which unlike Pirate Code are actual rules, allow for one in-water hull survey in lieu of an out of water dry dock inspection in a five year period.  This would allow the Disney Dream to stay online for five continuous years with an in-water survey in place of the interim dry dock.

The change in guidelines is a direct result of the technological advances in corrosion resistant materials, quality, endurance and effectiveness of hull coatings.  The Disney Dream has a first of its kind non-toxic hard coating that when applied, feels like fiber glass. This was chosen to reduce surface resistance in the water thus reducing fuel consumption resulting in a more environmentally friendly ship. The hard coating is a 20-year product that does not need to be re-applied according to Frank de Heer (who at the time of the Dream build was Vice President of New Ship development for Walt Disney Imagineering).

The new guideline allows for an in-water inspection only applies to ships which are 15 years of age or less with a previous hull survey on file for comparison.  A ship could request an in-water survey in lieu of dry dock on it’s 15th anniversary of the ship’s constructions if a dry dock inspection was performed within the previous 30 months. Additionally, the ship’s master must confirm in writing the ship has not sustained any grounding or contact damage since the previous inspection, and that nothing unusual has been observed to suspect that any part of the hull has been otherwise damaged.  In the event the in water survey reveals damage to a ship, then the surveyor may require the ship dry-docked in order for a more comprehensive survey and repair.

So, this new guideline would mean the Disney Dream would not go offline until the fall of 2015/early 2016.  The Disney Fantasy would then be looking at her 5 year dry dock in early 2017 pending any unforeseen issues.

I would like to thank Chris for leaving some great commentary last week and pointing me to the IMO dry dock guidelines.