Hurricane Ernesto, a Category 1 hurricane, delivered a direct hit to Costa Maya at 11PM EST  on August 7th with maximum sustained winds of 85mph and had a pressure of 980mb.  There were no early reports of damage, but officials said it may take time to assess whether Ernesto’s rain and wind caused problems.  The [Disney_Fantasy] was originally schedule to call on Costa Maya this week before switching to an Eastern Caribbean Itinerary keeping her safely out of Ernesto’s path.  The Fantasy is scheduled to set sail on a Western Caribbean August 18th with a stop in Costa Maya on August 21st. 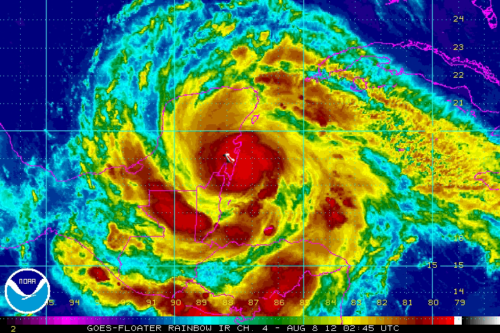 As one storm comes to an end another is on the horizon.  A low pressure area (the orange circle on the map) associated with a tropical wave has developed in the Atlantic and is projected to follow Ernesto’s path.  Conditions are marginally favorable for gradual development over the next couple of days, with a 30% chance of becoming a tropical cyclone during the next 48 hours.

Finally, there is a large wave forming over Africa (green circle) which may emerge into the Atlantic in the next day or so.  Currently, the models are calculating a path north east of the Bahamas and up the East Coast of the United States.